Tender-crisp but still roasty and toasty Brussels sprouts get a makeover with an unlikely flavor combination – maple and bacon! Try this keto Brussels sprouts recipe and fall in love with this humble veg! Read on, and I, Chef Jenn, will show you all my tips and tricks to make this the best keto vegetable side dish ever!

OK I know, I know, maple syrup isn’t keto, but did you know there are sugar-free maple syrups out there that add SO much depth of flavor to this Brussels Sprouts with Bacon & Maple Syrup recipe?

And, this keto vegetable side dish recipe just isn’t the same without it.

But, if you give them a quick trip in a skillet (use a large cast-iron or non-stick skillet with a lid) to pan-roast them, add some smoky bacon and a touch of sugar-free maple syrup (I like Pyure brand with organic stevia), they become this magical, mystical, plate of roasted, smoky, sweet goodness that you’ll fall in love with.

How to Buy and Clean Brussels Sprouts

When buying sprouts, look for firm sprouts with tightly packed leaves, especially around the stem end.

Also try to buy the ones that are all about the same size. This will help with uniform cooking.

And, clean those little guys properly!

Take a slice off the stem end with a good sharp paring knife, and pull a few leaves off the sprout. Check carefully for blemishes (keep removing leaves if you see nastiness) and for bugs. Yup, bugs. Bugs LOVE Brussels sprouts.

Up to you what to do with a buggy sprout, but I usually toss it. I’m not gonna deal with that. I’ve even returned a bagful of sprouts to the grocery store because every sprout was infested. Yuck.

How to Cook Brussels Sprouts with Bacon & Maple Syrup

The trick to this recipe is to give the bacon a head start.

This does two things:

1) First, it adds some tasty fat to the pan to help those sprouts cook.

2. Second, it gives the bacon a chance to cook without overcooking the Brussels sprouts.

Just don’t overcook them! Brussels sprouts should still be crunchy and bright green. And, if you quarter them, they take hardly any time to cook. Depending on their size, 4-5 minutes in a skillet is all they need.

What to Serve with Brussels Sprouts with Bacon and Maple Syrup

Make this yummy dish of Brussels Sprouts with Bacon and Maple Syrup and fill up on fiber-packed goodness. Go for a doubleheader of bacon with Bacon-Wrapped Pork Medallions or everyone’s favorite Keto Sloppy Joes.

Well, technically anything can be frozen. But I don’t suggest you freeze this recipe. You see, Brussels sprouts get downright nasty after freezing and thawing. I never buy frozen sprouts – buy them fresh and see how delicious they can be! 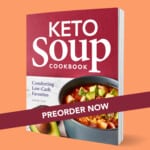